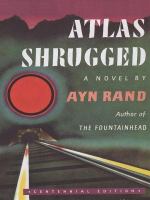 This is the story of a man who said that he would stop the motor of the world, and did. Is he a destroyer or a liberator? Why does he have to fight his battle not against his enemys but against those who need him most? Why does he fight his hardest battle against the woman he loves? You will learn the answers to these questions when you discover the reason behind the baffling events that play havoc with the lives of the amazing men and women in this remarkable book. Tremendous in scope, breathtaking in its suspense, "Atlas shrugged" is Ayn Rand's magnum opus, which launched an ideology and a movement. With the publication of this work in 1957, Rand gained an instant following and became a phenomenon. "Atlas shrugged" emerged as a premier moral apologia for Capitalism, a defense that had an electrifying effect on millions of readers (and now listeners) who have never heard Capitalism defended in other than technical terms.
Publisher: New York, N.Y., U.S.A. : Dutton, [1992]
Edition: 35th anniversary ed.
ISBN: 9781101136638
1101136634
9781101137192
1101137193
9781101137055
1101137053

This is not unrealistic. It is happening right now!

This is a masterpiece.

💤 There aren't any spoilers for this book, because nobody finishes it, so nobody knows how it comes out. Recommended, for insomnia.

Yes, it's long, but it's worth it. Start with the Fountainhead.

Unfortunately, three stars is not an accurate depiction of my feelings about the mammoth dystopian philosophical sci-fi melodrama romance action novel that is Ayn Rand’s “Atlas Shrugged.” Yes, it is all those things, and more, as Rand threw pretty much everything but the kitchen sink into the 1168 pages of her fourth and final novel.

Rand is not a great writer, at least not of fiction. Everything exists, not in the service of the characters or the story as one might rightfully expect, but merely for her philosophical aims. Characters are largely one-dimensional, all-good or all-bad. Heroes are driven by something so innately pure (to her and them anyway) that everything in their lives — the entire world itself — can only be seen and acted upon through this perfect lens. Villains border on the comically grotesque, so obviously stupid and ridiculous their words and deeds are meant to be perceived. Dialogue is often atrocious, as if Rand had never had, let alone heard, a normal conversation, and is written in a way that is impossible not to imagine it spoken in that 1930s and ’40s Hollywood Mid-Atlantic stagey way. The story itself is sprawling and unwieldy — as you might expect at eleven hundred-plus pages — attempting to encompass the entire dystopian world Rand is meant to have built, while remaining intimate enough so that we might actually give a damn about the protagonists. The problem is that the world she’s built is often just as one-dimensional as her characters. Everyone everywhere — the world over! — has lost their minds and is falling hook, line, and sinker for the most cartoonish version of socialism you might imagine.

The premise of the novel — what happens if the prime movers of the world went on strike — isn’t a bad one. Nor are many of the fundamentals at the heart of Rand’s philosophy (which is not the same thing as the fundamentals of her philosophy). Frequently, though, character, story, and philosophy blend into perfect harmony. It is at those times the story is a delight to read. When they are out of sync, however, the story is an absolute bear, and I sometimes found myself needing days, or, in a couple of instances, weeks, before I could bring myself to go back for more.

If you’re considering “Atlas Shrugged,” know that, regardless of your politics or philosophical viewpoint, reading it is a commitment not to be taken lightly. It’s the literary equivalent of an ultramarathon, and it will test your patience, your stamina, and, sometimes, your will to live. (I’m only half-joking about that last one.)

Ayn Rand’s magnum opus for sure. A tough long read, but glad I did It. Her philosophy is not for everyone. But, I think one should at least try to understand her philosophy of objectivism that A is A.

If you like this book you must be a teenager or an uneducated adult. #sad

Ayn Rand is brilliant, but this was a tough read for me. Very slow moving and brooding.

Actually not crap. Rand's politics and personal life are well-documented train wrecks, but you've got to set that aside and suspend disbelief as you read.
Woefully under-edited: somewhere in there is a half-decent 350-page book crying to get out. But her plot is at least coherent and interesting, which keeps you turning pages. Her dialogue can be wooden, but she works in some decent lines in places.
The Fountainhead is as good and 400 pages shorter. Her short story Anthem is the pick of the litter, though. I would actually call it good, and it gets her views across through suggestion and metaphor, which is more eloquent and effective than this amphetamine-fueled brain-dump.

“I swear by my life and my love of it that I will never live for the sake of another man, nor ask another man to live for mine.”

"To trade by means of money is the code of the men of good will. Money rests on the axiom that every man is the owner of his mind and his effort. Money allows no power to prescribe the value of your effort except the voluntary choice of the man who is willing to trade you his effort in return." Francisco d'Anconia

"Wealth is the product of man’s capacity to think. Then is money made by the man who invents a motor at the expense of those who did not invent it?" Francisco d'Anconia

"I am a trader. I earn what I get in trade for what I produce. I ask for nothing more or
nothing less than what I earn. That is justice. I don't force anyone to trade with me; I only
trade for mutual benefit." John Galt

"We're on strike against your creed of unearned rewards and unrewarded duties." John Galt

Money is a tool of exchange, which can't exist unless there are goods produced and men able to produce them. Money is the material shape of the principle that men who wish to deal with one another must deal by trade and give value for value. -Ayn Rand, Atlas Shrugged, Part 2, Ch. 2

Love is our response to our highest values — and can be nothing else. -Ayn Rand, Atlas Shrugged, Part 2, Ch. 4

brookszirkel thinks this title is suitable for 17 years and under

HtetNAung thinks this title is suitable for All Ages

ecrl thinks this title is suitable for 18 years and over

AmandaVollmershausen thinks this title is suitable for 16 years and over

susienor thinks this title is suitable for All Ages

Mee2 thinks this title is suitable for All Ages

EuSei thinks this title is suitable for 13 years and over

rwh77 thinks this title is suitable for 21 years and under

EuSei thinks this title is suitable for All Ages

There are no summaries for this title yet.

There are no notices for this title yet.

Find it at Sno-Isle Libraries