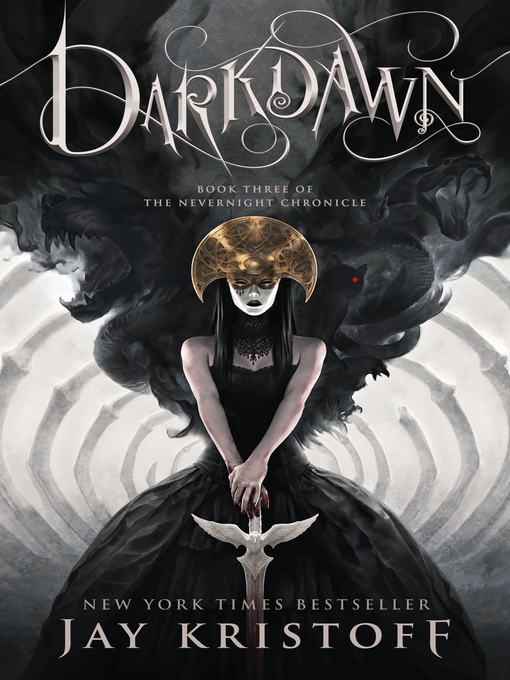 In this epic conclusion, Darkdawn, book three of the internationally bestselling Nevernight Chronicle from New York Times bestselling author Jay Kristoff. The greatest games in Godsgrave's history have ended with the most audacious murders in the history of the Itreyan Republic. Mia Corvere, gladiatii, escaped slave and infamous assassin, is on the run. Pursued by Blades of the Red Church and soldiers of the Luminatii legion, she may never escape the City of Bridges and Bones alive. Her mentor Mercurio is now in the clutches of her enemies. Her own family wishes her dead. And her nemesis, Consul Julius Scaeva, stands but a breath from total dominance over the Republic. But beneath the city, a dark secret awaits. Together with her lover Ashlinn, brother Jonnen and a mysterious benefactor returned from beyond the veil of death, she must undertake a perilous journey across the Republic, seeking the final answer to the riddle of her life. Truedark approaches. Night is falling on the Republic for perhaps the final time. Can Mia survive in a world where even daylight must die? New York Times and internationally bestselling author Jay Kristoff's writing has been praised by critics and readers alike and has won many awards, including four Aurealis Awards, an ABIA, and David Gemmell Morningstar and Legend awards.
Publisher: [S.I.] : St. Martin's Publishing Group, 2019.
ISBN: 9781466885059
Branch Call Number: eBOOK OVERDRI
Additional Contributors: Overdrive Inc

Garfinkel thinks this title is suitable for 18 years and over

Holy gods do I have emotions. I don't know if I'll ever NOT feel suffocated by the reality that this series is over. This final instalment made me laugh, bawl, SOB, smile, gasp, and everything in between.

Mia Corvere has been on the hunt for revenge for eight years. After thinking her journey over, her quest fulfilled, in the sands of the Gladiatii, she now knows just how wrong she was - and the price of what she wants more than anything may be higher than she could ever know. With her familia by her side, she's to face the most intense war she's ever waged, on a scale of gods and goddesses, suns and moons, life and death.

I was so ready for answers with this last book. I spent Godsgrave wondering how everything was going to fit together, but then also just so flabbergasted at the twists and turns that I almost forgot to wonder at the same time. Going into this one, even just at the prologue/recap, I knew that we were in for it this time. Everything was going to be revealed. And let me tell you, it really goddamn was, and those revelations start right at the beginning of the novel and literally never stop coming.

I feel like these characters are my family. I feel like I know Mia better than I know almost all of the people I talk to on a daily basis, and I love her more than about 99% of those people. She is so fierce, brutal and broken but so steadfast in her resolve. I absolutely adored her journey with Ashlinn, who I also have grown to absolutely LOVE so much more than I thought I would. I feel like I can't discuss a lot of characters here without spoiling it, so I won't, but just know this: every single one is wonderful. Complex, ever-changing and growing, always multi-faceted and so real-feeling. Jay has a knack for creating characters who I want to ride with into battle, and I wish I knew these ones in real life.

Again, plot-wise, I won't discuss much, because I went into this knowing nothing and expecting everything and that's exactly what I got. This final book is full of twists and turns just like the rest of the series has been. I will say that the scope of these novels is intensified here; in book one, Mia's world was expanding so fast, and so it felt smaller. Here, the fate of Godsgrave is at stake, and the scale has become gargantuan, playing with forces of nature and gods and goddesses. Sometimes that turns me off of a series, but here, it just felt right.

I think that's what I adore about these books more than anything: they feel so utterly thoughtful. Bursting with love and creativity and a heroine who spits daggers and will never settle for anything less than what she wants most. There's such a beating heart in these pages, and I will never not love them. I feel like there is a hole inside my chest now that can only be filled by rereads and forcing this series on everyone I can.

There are no summaries for this title yet.

There are no notices for this title yet.

There are no quotes for this title yet.

Find it at Sno-Isle Libraries