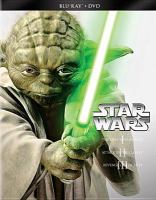 I, The Phantom Menace

There is so much good in this film, but it is brought down a little by the goofiness of Jar Jar. This is still an underrated film that is better than it gets credit for.

There are many things to like: It's Star Wars; advancements in technology, CGI, pod races...

It does a pretty heavy job of telegraphing the Darth Vader situation, which I still feel was poorly done.

A long time ago, in a galaxy far, far away, a boy was born to bring balance to the Force, which had become really boring. It was not to become more interesting for a while time yet, as he is still an annoying child in this story. But you've got a pod race, galactic trade routes, and young Natalie Portman swanning around intricate costumes. Also virgin birth, which SPOILER is going to come into play in later films.

Probably the weakest of the Star Wars films. Slow political drama that remains unexplained at the end of the movie.
Our family watched this with the RiffTrax comedy commentary which made it significantly more enjoyable.

Witness the beginning of the epic Star Wars saga as the infamous debut of some fan favourite (and some much-hated) characters. Many people sensed a trap when this movie was released, fearing it to be just a cash-grab by Lucasfilm. While the introduction of a character so stupid and pointless it proves the ability to speak doesn’t make you intelligent, the addition of Darth Maul to the universe showed that the prequel trilogy could have some great cinematic moments. The movie made use of a surprising amount of practical effects, given the reputation of the prequels for using lots of CGI. While we will follow the prequel trilogy with great interest, always remember: Midichlorians are the powerhouse of the force. 4/5 Darth Maul carries this movie.
@wolfteen of the Hamilton Public Library's Teen Review Board

Star Wars The Phantom Menace is the first movie in the prequel trilogy, taking place thirty-two years before A New Hope. The movie is about Jedi Qui-Gon Jinn and his apprentice Obi-Wan Kenobi protecting Queen Amidala trying to secure a peaceful end to a large trade dispute. They meet a boy named Anakin Skywalker, a young slave with strong natural powers of the Force. Anakin ends up leaving his home and his mother to train as a Jedi with Obi-Wan and Qui-Gon Jinn. If you are interested in a backstory to the original Star Wars trilogy, I would definitely recommend watching this movie. However, the movie is not as well planned out as the originals. The plot is very confusing and it is very obvious that it was a poorly written script. Even though the movie is filled with some of the best actors in Hollywood, this movie was definitely not some of their greatest work. I do believe that it is a good movie to watch with the family. Overall, if I had to rate this movie, I would rate it two out of five stars.
@Sapphirereads of the Teen Review Board of the Hamilton Public Library

I think most Star Wars fans can agree that The Phantom Menace is the worst Star Wars movie in the franchise. George Lucas tried his best to bring back the beloved series and create a background story for Darth Vader/ Anakin Skywalker that fans would love but instead we got the prequels. In the original movies of Star Wars they used practical effects (no computerised help) most of the time to create real looking creatures and backgrounds but in the prequels George used CGI. Using the CGI meant that the creatures and background looked non-realistic. Not only did the CGI help to make this a movie hard to watch but the half a film long pod race scene made matters much worse. The only good thing about this movie was the beautiful music in the background by John Williams. Overall this movie is for sure the worst in the whole series. 2/5
@TheCanadianHufflepuff of the Teen Review Board of the Hamilton Public Library

This movie is arguably the weakest film in the Star Wars series. The movie has extremely long exposition and not much action which is characteristic for Star Wars. There are a few saving grace moments, where the action is amped up, and of course the music by John Williams is consistently wonderful to listen to. The movie sets up the whole series, albeit in a slow and somewhat boring way, and therefore it is commonly regarded as the worst Star Wars film, which I would agree with, although it barely passes the second film in the prequels, the clone wars.
@ecozones of the Teen Review Board at the Hamilton Public Library

darth maul does live because he is in the clone wars

Almost the weakest Star Wars movie. There are some good scenes, but there's too much Jar Jar. If Lucas thinks Jar Jar was necessary for little kids, then he completely missed why his original movie was so beloved.

This was quite a disappointment: the dialogue was very stiff, even amateurish, and the characters rather flat (or quite annoying (Jar Jar)), and the plot rather boring. The visuals were, on the other hand, were extraordinary.

Jar Jar Binks's humor was annoying and bland but kids will find it amusing. The backstory of Anakin was good to know. The story can get busy but in summary, it's simple. Some aspects of this film I did not agree with but the battle to reclaim Naboo was entertaining and I loved Qui-Gon Jinn's part in the film. Overall, it is a good watch but it is not an amazing film.

Jabba the Hutt is the highlight of this terrific Episode. After all, he IS the star in STAR WARS! ;)

I LOVE THIS EPISODE, MY FAVORITE CHARECTER IS QUI GON AND OBI WAN , THIS IS THE BEST ONE!!!!!!!!